I was wondering how big of a process... would turning Caustic 3 into a Vst be..?

just like it was turned to a PC version

a lot of work.

It wasn't "turned" into a PC version. I develop on PC. If anything, it was turned into a mobile version. VSTs are a whole other ballgame, different hosts, 32b vs 64b. There are lots of good VSTs, that's not my niche.

Will there be future updates past Caustic 3.2? Or is Caustic 3 at its peak?

I understand...... bt I was just trying to compare the amount of labour and/or money it would take to turn the current version into VST or updating to have VST support....

Anyways will there be any updates.... any new features?

For me, Caustic is the only app that has everything I need.. it really does everything right. The only thing I hope for is that it keeps working on future updates to iOS and Android.. That's enough for me.... 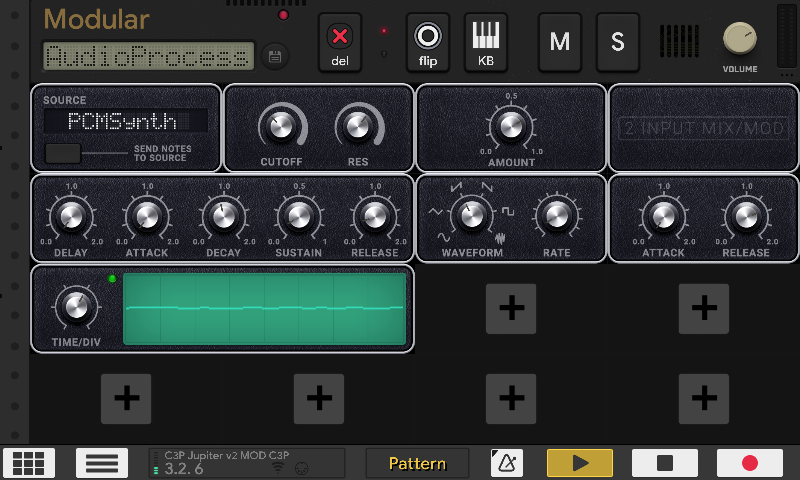 Hi Rej. It is true that there are many VST plugins but the ideal workflow is to program in caustic while I am on the street or at work and then open my project on the computer as VST and continue it on my favorite Daw. I consider that this function and that of the native Midi clock were in a new version. Caustic is excellent but needs to be integrated into the professional workflow. It is a magnificent tool. Thank you

the ideal workflow is to program in caustic while I am on the street or at work and then open my project on the computer as VST and continue it on my favorite Daw.

There's  a desktop version of Caustic for Mac and PC (for free) so you can continue working on your project on your computer. You can also export stems and import them into your DAW like Ableton of Logic...

Yes, I know, I use all platforms. But that means exporting every time you make a change or automation. The idea is simple. Caustic is a great tool to program outside or as a groovebox live while mixing. But it needs to be more integrated into the systems in real time. You need Midi clock and allow the free versions of mac and pc to open as plugins ... The attraction of Caustic is portability. Developing that would open the commercial field of Caustic in the production systems for electronic music. Let's not see Caustic as a simple tool .. It really is powerful and Rej has done an incredible job!

Quote: "The idea is simple."

Sure. Just like flying to the moon, world peace or living forever. The idea or concepts are simple. The execution and financial viability are obviously not.

Given the thousands of competing VST's on the market, the fact that Rej is the sole developer and that the chance of it being financially viable as a plugin in the end is slim, it would seem that any growth should be on mobile systems first. I don't believe I speak alone in that I'd rather see any development be prioritized to advancing Caustic as it is vs trying to kludge together a VST.

While I and others obviously understand what you "wish" for, and we understand that using it in a DAW would be ideal, it's not a practical move going forward. Attempts at suggesting workarounds are just trying to be helpful, they aren't coming from a lack of understanding, they are coming from those that have come to terms with the likelihood of it moving forward in other directions.

Your best bet at this moment is accepting that and either finding and using workarounds as we all have or using different tools.

Here's a simple idea - pretty much anything found in Caustic already exists as a VST. Use those instead. Export the MIDI from Caustic and drive other VST's readily available that are equal or better quality than any machine in Caustic. There are dozens and dozens of better samplers, drum plugins that support layering via velocity, 808 simulators, synths that specialize in pads, modelled modular synths, you name it.

Always in this forum the air feels like nobody wants Caustic to grow ... A thousand buts. This is the best tool that has been developed for mobile. Assume you can grow. As I said .. Rej has developed a great tool and many in the forum assume that it is only one application. Well, there is the proposal. Caustic will grow as much as "but" is avoided.
regards

"But" that's simply your interpretation. I tried to explain, "but" I will invest no more time or energy on this topic. Thanks for your understanding...

Do not try .. This way they take away from the developer the desire to think more for your app. Having worked with several brands of products for dj and electronic music and having so much time giving support for djs I can say that Caustic is the best and smartest thing that has been released. And it is a great tool for training and programming sequences. "But" it seems that comments like yours only feed the desire to stall the product. I would not hesitate to invest in development and associate it with some brand of hardware for electronic music.

@64n6h0u23, The point is one and only one: rej is losing the desire to continue updating caustic because who like you keeps asking, and keeps asking and keeps asking. As long as people ask for rej they won't update. The concept is simple and clear. Do you want rej to update? I want it too as we all want it, and here's one thing you can do: DO NOT ASK ANYMORE. You will see that the updates will come but give time to time.

Furthermore, you don't know if what you are asking is not already doing it or will not do it in the future. I hope you can understand it.

It is an app that has not been updated for a long time and many of us have faith. Well it would be a shame if you no longer feel like continuing with the project. There is nothing wrong with users asking after having spent so much time. It has a great project in hand. Hopefully continue it and do not fall into disinterest.

I can understand it, believe me, however Rej himself wrote that seeing so many people asking for many features, it makes him remove the desire to continue. However don't worry: Rej will continue to update, we just have to trust. It will be worth the wait I guarantee you. :)

Excellent! I know it will be that way. tremendous app should not stop. I would recommend that you focus on basic functions that are not yet there. Midi clock is basic. I will be looking forward to it. Caustic is as it is and its GUI is magnificent. No other Live is needed. Cheers