I love Caustic and I use it all the time, but in the past week I've had the same tragic error happen twice on two separate songs. In each case I had a file I had been working on for a while, and saved multiple times (but always overwriting the old file, not saving new versions, unfortunately). Often when I open the app, the song I've been working on is still loaded, but sometimes it won't reflect the most recent changes. Usually I can open the file again and everything will be fine--the saved version will have all the changes I saved. This is annoying, but not a huge problem as long as I make sure to save my work before I quit the app. But twice, when I opened the saved version the file has been corrupted.In each case, all of my loops were gone, the sequencer was empty, and the names of the instruments were all the same even though the actual icons and interfaces were different. In other words, the first time it happened all of the track names in the sequencer view said "BEATBOX", and the second time it happened they all said "PCMSYNTH1." In each case, track label reflected the instrument type in track 1. Unfortunately, all of the work on each of those songs appears to be lost.

1. Is anybody else having this problem?
2. Is there a way to repair the corrupted files?
3. Can this problem be fixed?
4. Is there any chance of some sort of automatic file backup, or version saving, or autosave feature so that even if the bug can't be fixed (or if other data-loss-causing bugs crop up in the future) it will be possible to go back to a pre-corrupted version?

Happened to me last night too. I thought it was just a phone or memory issue, after a hard reboot, the file would hang trying to load and would drop me onto the phone's home screen.

But I didn't sweat it, because I have it backed up elsewhere, and earlier versions as well.

I'm starting to wonder if my SD card may be starting to wear out or something. I need to get a good scanner and check it

I haven't had corrupted files, but have had freezes and unexpected quits when choosing load song or even new song (loading default). At other times the file loads but I have a black screen, sidebar and bottom bar showing, and I can slide to a module without problems.

Not sure if the hanging file is a memory issue, had two freezes in a row yesterday, one before and one right after freeing up memory in task manager.

Also had the problem of changes not being saved, seems safest to give the file a new name upon each important change.

Sorry to hear about losing files. 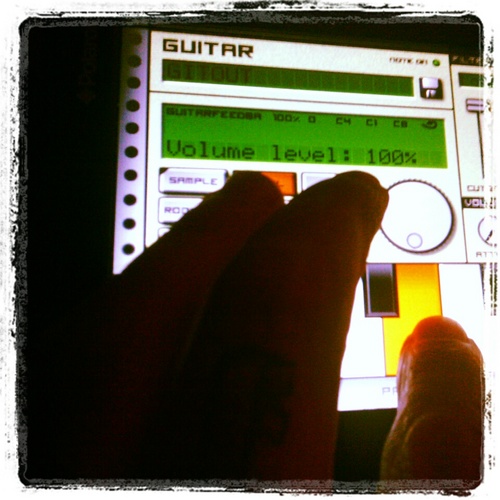 perhaps a check box to choose "load blank song on start up" would help. I run into similar issues. It would be great if I could start every time with nothing but the mixer and sequencer loaded.

Check the 'let me start things of' on the 'tips and tricks' forum. Rej mentioned you can save your own rack as default. By giving it the name defaultsong it should be opened when tapping new song.