If you're looking for some vocal clips to spice up your Caustic tracks but you don't want to use your own voice, forum member Bojeroo a.k.a. PolynomialC Software has you covered with his newly released Vocality app for Android.

Vocality is a front-end tool for whatever text-to-speech engine(s) you have on your device. It provides a simple interface for entering text, changing speed and pitch and previewing it all in real-time. Once you're satisfied with the clip, you can save it as a WAV File for use in Caustic or any other software you have that accepts WAV files. I'll be working closely with Bojeroo to streamline the workflow of getting Vocality clips into Caustic in the future.

I've been playing with it and installing various TTS engines from the play store this morning. I definitely recommend the Ivona voices, you can try them on their website and download the one(s) you want to your Android device (not all their PC voices are available). They seem to be in beta right now so all the voices are free during this period.

If you're wondering what it sounds like, well try the app for yourself (it's free!), but have a listen at a recent Caustic track from forum member Danjdob. Vocality loaded with one of Ivona's female voices was used to create the two spoken samples in the track ("the power is in the music,  the music is in the soul")

Vocality announcement thread on the forum

I've been working like mad on Caustic these past few months, and I'll soon have something to show for it (at least for testing) but over the Easter break, I had to scratch an itch...

I'd been optimizing code for a few days when I decided to tackle the modular synth that's going into Caustic. I got a few % back but the main optimization strategy I had thought of actually turned out to yield worse performance, so I reverted a full days work and I felt like I had lost my edge.

Enter the "Falling Sand" game. Ever since I played the original Java game back in 2005-2006, it's been one of my favorite time-wasters. I have a few different versions on iPad, but most of my devices are Android and there simply wasn't a falling sand game on Android that ran as fast as on iOS and that bugged me. Well, after this latest modular synth optimization setback, I knew what I needed to do to get my confidence back.

Here's the result of a few evenings optimizing and modifying the EnigmaSand 2 source code. How fast it runs will depend on your CPU-to-screen size ratio, but I can safely say it's A LOT faster than other Android falling sand games.

It's a full native (C/C++) app so Android 2.3 or greater is required. You also need a screen 800x480 or bigger. It might work on smaller screens, but I don't have anything smaller than 800x480 to test on so no guarantees.

Now, back to work on Caustic... I'm happy again.

Version 2.1.2 has been submitted to Google Play, Amazon, Windows, PlayBook and to the upcoming Blackberry10 touch devices, to be launched later this month.

The new version fixes MIDI connection problems some people were having with their devices, so let me know if there are still outstanding MIDI issues.

I have updated the link for the Windows version in the main post for that, but here's a shortcut if you just need the installer 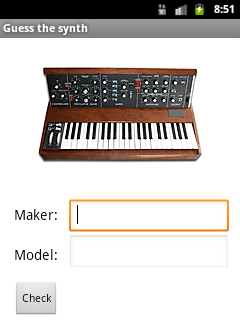 Looking for a little distraction from composing?

Fellow KVR'ian Aldo Calpini has posted his first Android app and it's dedicated to synth lovers. It's a quiz where you have to name the synth model based on a picture that's shown on screen.

I'm terrible at identifying vintage synths but I did get a few right! How many can you name?

I've just submitted Caustic 2.1.0 to the various app stores, so it should be trickling in over the next few hours/days depending on your platform.

I've also updated the Windows version to the latest version.

I have started to write some technical blog posts about the CausticCore and CausticToolkit on my company blog. This relates to Java Android developers, Apache Flex and Flash Player Adobe AIR developers.

If you have any questions about any information on my blog, post a comment on the blog and I will be sure to get back to you with an answer. I'm also a committer and PMC member in the Apache Flex project, so AIR mobile developers expect some interesting things in the future.

I am also looking for beta testers that develop on these two platforms, if your interested, get a hold of me through PM on this site, my contact page on http://www.teotigraphix.com/contact or in the forums here.

Here is an excerpt from one of the first blog posts;

A new website has been launched by the creator of the popular iDesignSound.com devoted to Android music apps.

Maybe it's not the smartest business move for me to lead you to others apps, but I'm confident in my product and Alex deserves some recognition for the great work he's done setting it up.

Here's a peak at one of my side-projects. I've wanted to make a modular synth since I began making sense of synths a few years ago and wrote Caustic's subsynth.

Now that Caustic 2 allows for dynamic rack placement of machines, it also expands things for new machines. One of the suggestions that often comes up from gear-heads is the idea of a fully modular synth. I.e one you can make from pieces and connect however you wish. These monsters are great experimenting and learning. I didn't write this especially for release. I've always had a win32 version of Caustic used for debugging (debugging on the Android device is slow and painful so I only debug on device intensively before release). So what you're getting is the exact same app as on your portable device, quirks and all.

Although it has been out for over a week now, I just thought I'd mention here that Caustic is now available on BlackBerry's tablet.

The PlayBook is a really slick tablet, and can be picked up for pretty cheap in most parts of the world. The performance is great, the latency is low (~16ms) and the OS is really nice once you get used to it (coming from Android).

Caustic 2 is available as a free demo and full/paid version on BlackBerry AppWorld.

A big welcome to those coming here from their PlayBook, I invite you to register and join in on the forums.

Update - 15 June 2012: It seems as though AppWorld is refusing to publish the "Community Content Pack" installer because it's not a "real" app. So I"m offering it via this website in the meantime. Download the ZIP file, connect your PlayBook and open it as a USB device, browse to the misc/caustic/ folder and extract the ZIP contents there. The content should then be available through the app in "community1" folders in both the demo and paid versions.

This also means it will be harder to get 3rd-party content packs over from the Android market as well. Zvon have put their stuff on a dedicated PlayBook page here, with instructions.